personal growth in the form of public humiliation

Hiking, Crying and Other Sports

I’ve lived  27 years (plus a few days) on this planet and can’t for the life of me figure out what recreational exercise is for.

At age 6 I was enrolled in community classes for gymnastics.  For some months the purpose of these skills were meant as a social bridge between me and all the other little 6 year old girls who got on and off at the same stop as me.  Straight down the bus stairs, out the door and on to a patch of grass perfect for exhibiting our best walkovers, most spirited cartwheels and energized round-offs.

Our teacher changed from a friendly, motherly woman named Terry to a wannabe Olympic coach a la KGB with dreams of his own personal Nadia Comaneci.  His name was Joe.  And soon in to our training together he halted the entire gym of 20 or so romping, laughing, happy girls to wait for nervous, shy, stage-frighted Audrey and her cartwheel on the beam.  (Sidenote:  Have you ever BEEN on a beam?  Do you know it’s like, 2 inches wide??  So as far as me tumbling over, missing my footing, smashing my bits and accidentally making it impossible to pass on those attractive Hotchkiss genes…no way.  No way.)

Artistic, Not Physical. Who the hell is Eric Riddleberg?

Some would have saw this as a chance to establish to the universe that I really have no tolerance for assholes.  However, I chose instead to exhibit pacifism (cry, and run off the mat to sit on the bench to wait for Mommy).  Besides, I don’t think I had the vocabulary at the time to say something like:

“You sick, demented man.  Do you get your jollies off by putting the spotlight on little girls who are clearly shy and, p.s., not actually that good at gymnastics?  Do you think that’s going to make her stronger or just make her feel bad about herself and develop a penchant for Snickers bars for some ungodly reason much, much farther down the road in her late 20s?  Ease up!  This is Yarmouth, Maine.  This is Community Services gymnastics.  Look around you, Coach Joe:  You’re a failure.”

Eventually I would have the opportunity in the face of assholes to try all kinds of goodies:  direct negation, zealous confrontation, and (my favorite) “the humor approach.”  Most of these opportunities spanned the years I worked in Harvard Square (one kind of asshole) and at the coffee shop on Congress St. (a totally different kind, the kind I sometimes even feel compassion for). 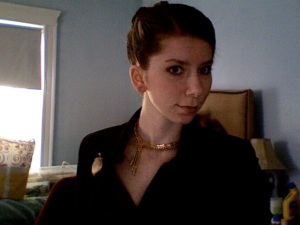 Now I'm older and I WILL tear your face off.

There was a long lag in extracurricular physical activities for me.  Gym class in school was fraught with a miniature me walking unenthusiastically about four paces behind a quickly moving amoeba of 10-year-olds chasing a soccer ball.  One time a girl standing on the jungle gym threw a basketball at my (unprepared) face and my nose bled for an hour.  Lawn sports, such as badminton, “catch” and croquet were alright and always welcome come 2nd period, mostly because you don’t have to touch anyone doing those.

In high school, much of P.E. (which was progressively titled “Health Sciences”) involved learning about dental dams, drugs (which I was already independently learning about at home…extra credit!) and canoeing.  Only rarely did we play team sports and when we did the teacher was enough of a misogynist to separate the boys and the girls in to two teams each and have the sexes play each other, maybe for fear of the boys going to grab something else when they really were supposed to be grabbing at the flag tucked in to the ladies’ gym shorts.  Also — by this time I had developed a knack for pretty funny sarcasm — usually good once a month or so to get out of something you really don’t want to do  (do you know what “gunnel wars” are?  No?  Good, don’t try to find out.)

In college…there was a brief stint cycling on stationary bikes (what was I thinking?), running, and yoga-ing at a ladies-only gym.  This was for revenge-muscles after a particularly devastating break up.  I was fit!  But when I succeeded at firmness I celebrated with quesadillas and pina coladas finished with lots and lots of dessert.  MMmmm…totally worth it.

It wasn’t until now, recently,… last month, that I could understand why anyone EVER would want to have shallow breath, blood pumping, sweat dripping, endorphins blazing agony.

The breath-taking, pants-shitting view from Kearsarge

The epiphany happened at Mt. Kearsarge in North Conway, NH with Tara, Brian and their dog, Rondo.  “You’re going to want to climb every mountain you see after his hike!”  Tara said three-quarters of the way up.  “I’m pretty sure I just want to get to the top, puke, shit my pants and be lifeflighted back to civilization right now,”  I managed through unbearably heavy breath, my pulse surging through my legs so strongly that the joints became stiff.

The following morning my legs were like big machines I couldn’t control properly.  No desire to climb again.

The next day my legs felt like I had fallen on the wrong side of Tony Soprano and sustained a serious HBO-worthy beating.  Still no desire to get on any mountains.

But on day three the gams were entirely healed and, for the first time, felt strong.  Really really strong.  Since then we have done a couple hikes and I plan on getting some awesome shoes and doing way more next year.  Eat every mountain in New England, as Tara put it.

The Official Audrey Sports Spectrum is wide and varied.  From mortifyingly embarrassing to gleefully sarcastic, I’ve now found the first genuine “like” in the bunch.  Pick a mountain, take the path, get to the top, sit a bit and look, climb down, and then do the whole damn thing all over again.

You are currently viewing the archives for October, 2010 at mise en place maine.